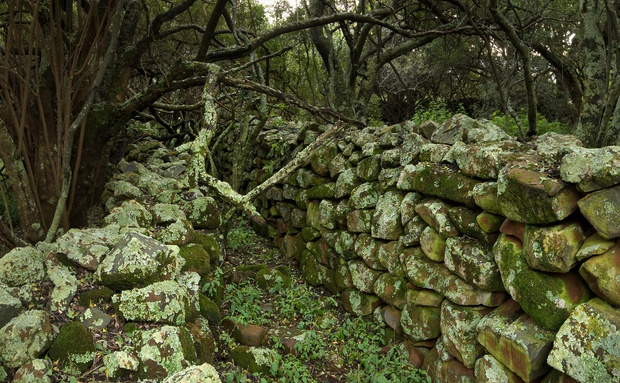 It is only a short walk to these most interesting sites and you can ask our manager for a guided tour.

Who were these people who built these structures?
The mystery can be solved by recent research done by Alex Schoeman and other archaeologists and since been proven by means of extensive investigations and discovery of artefacts, rock art and satellite and aerial imagery

It is now known that these people represented a lost and extinct tribe, the Bokoni or Koni people.

They were farmers, forgers of weapons and tools, miners and traders.

The smelting of iron and copper and forging of weapons and tools from iron ore and mixing this with charcoal and fluxes to get steel takes a very specialised skill set, even some form of chemistry to get the mixture right for the steel to be strong enough to be of use.

The chief of the village prized the metal-workers as the skill allowed for trade from and to other villages and even long distance to other peoples. (Serfontein, 2013)

This even included the trade in gold, where it was found.

The Bokoni also developed specialized farming methods using stone terracing for their crops and walls along roadways to prevent their livestock grazing on their crops on their way to and from pasture.

It is believed that the language spoken by this tribe was known as Sekona and was closely related to Pedi, both of which were the formative languages of Sotho.

We know this from work done in the early 1800s by missionaries in the area who worked with the last remnants of the tribe before they finally dispersed. (Delius et al., 2011)

As mentioned before, trade became vital to the economy of the early tribes, including international trade in gold, ivory, rhino horn, slaves and timber.

These were traded for beads, cloth, porcelain and metal goods.

This thriving trade industry was active from before 1000 AD. This connected the east coast of Africa with India, the Persian Gulf, Thailand and China. (Delius et al., 2011)

For tribes to travel from central Africa to trade with tribes that moved down the east coast of Africa they had to transvers land the Bokoni people occupied.

A transfer trade fee could be a reason why the Pedi, Nguni, Ndebele and other tribes went to war with the Bokoni and annihilated them

It is unclear which tribes were mainly to blame for the dispersal of the erstwhile Bokoni. (Delius et al., 2011)

Due to being attacked by various tribes, the Bokoni built walls around their settlements and villages, and they were positioned on top of mountains and hills so that they could be more defensible.

Rocks could be rolled down on attackers trying to penetrate their territory from below. (Serfontein, 2013).

View
Relax in nature away from the crowds

Participate in 'Own a Tree' Project and help us build your forest.