Contribution of forests to our environment 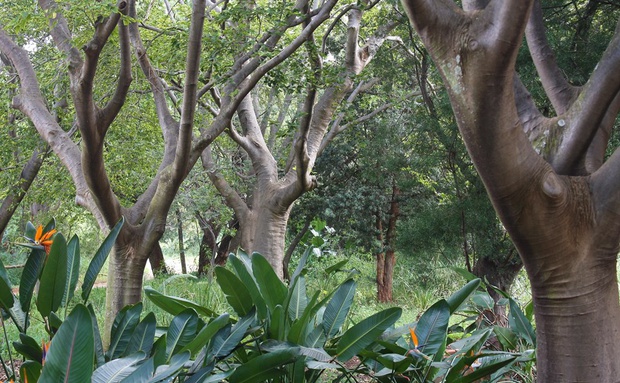 Contribute to our re forestation project by taking ownership of your own indigenous tree planted in the valley.

The Valley of the Rainbow Tree Planting Project is an opportunity to give back to nature and the environment of what we as humans have removed and destroyed.

Deforestation remains one of the largest threats to the environment. Many hectares of forests are lost each year due to deforestation as more people use wood for fuel. Experts predict that large areas in the world will be a desert if the indiscriminate cutting of trees continues unabated.

Deforestation is the clearance or the removal of a forest or trees after which the cleared land is converted to a non-forest use.
Examples of deforestation include conversion of forestland to farms, mining, settlements or urban use.
Deforestation occurs for many reasons: trees are cut down to be used or sold as fuel (sometimes in the form of charcoal) or timber, while cleared land is used as pasture for livestock, plantations and for human settlement.
Mining activities have contributed largely to deforestation in South Africa

The negative effects of deforestation
The removal of trees without sufficient reforestation has resulted in damage to the natural habitat, loss of biodiversity and aridity.
It has an adverse impact on bio sequestration or storage of atmospheric carbon dioxide by plants. Deforested regions typically incur significant adverse soil erosion and frequently degrade into wasteland.
Deforestation causes extinction, changes to climatic conditions, desertification and displacement of populations as observed by current conditions.

In order for forests to take up carbon, there must be a net accumulation of wood which can be achieved by replacing cut trees. The water cycle is also affected by deforestation. Trees extract groundwater through their roots and release it into the atmosphere. When part of a forest is removed, the trees no longer transpire this water, resulting in a much drier climate. Deforestation reduces the content of water in the soil and groundwater as well as atmospheric moisture.

The dry soil leads to lower water intake for the trees to extract. Deforestation reduces soil cohesion, so that erosion, flooding and landslides ensue.

Instead of trapping precipitation, which then percolates to groundwater systems, deforested areas become sources of surface water runoff, which moves much faster than subsurface flows. That quick movement of surface water can translate into flash flooding.

Trees and plants in general, affect the water cycle significantly: Their canopies intercept a proportion of precipitation, which is then evaporated back to the atmosphere (canopy interception); Their litter, stems and trunks slow down surface run-off; Their roots create macropores — large conduits — in the soil that increase infiltration of water; They contribute to terrestrial evaporation and reduce soil moisture via transpiration;
Their litter and other organic residue change soil properties that affect the capacity of soil to store water.
Their leaves control the humidity of the atmosphere by transpiring. Ninety-nine percent of the water absorbed by the roots moves up to the leaves and is transpired.

As a result, the presence or absence of trees can change the quantity of water on the surface, in the soil or underground or in the atmosphere.

This in turn changes erosion rates and the availability of water for either ecosystem functions or human services.

Deforestation has accelerated sharply across the country in recent years due to power challenges and mining activities.

The Valley of the Rainbow Planting Days will be commemorated under the theme, “Forests for water and life”.
The theme reminds us to look at one of forests’ important uses which is their guaranteeing water quality and supplies.

This function is under threat due to climate change and changing land use and land-management practices.
In the past years, South Africa has witnessed illegal farming, mining and settlements in forest areas previously set aside as water catchment areas.

This has led to the rampant cutting down of trees for various reasons. The resultant deforestation has led to heavy siltation of our water bodies leading to limited water supplies for different activities that have an impact on livelihoods.

Through the Valley of the Rainbow Tree Planting Day campaign, we want to highlight the need for sustainable management and protection of forests to preserve their benefits, including that of water provision.

Join Own a Tree and Build your Forest Project

View
Relax in nature away from the crowds. Book online on the website for a SPECIAL 30% DISCOUNT

Participate in 'Own a Tree' Project and help us build your forest.